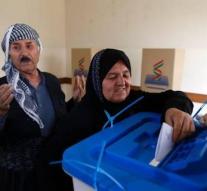 erbil - In the Kurdish region in northern Iraq, the controversial referendum started on independence on Monday. More than 5.2 million voters must decide whether the Kurdish autonomous territories will break apart from the rest of Iraq. A large majority is expected to be independent. However, the vote is not legally binding.

Against the referendum there is also strong resistance. The central government in Baghdad says the popular vote is unconstitutional. The neighboring Iran closed the sky to the Kurdish areas on Sunday. Turkey calls the vote 'illegal and invalid' and threatens sanctions. The United States as a leading ally of the Kurds in northern Iraq and the United Nations (UN) also spoke against the referendum.