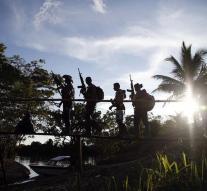 - Colombia is probably the beginning of October a referendum on peace with the FARC. The population must take a decision on the peace agreement in which the Colombian government and the rebels have negotiated over the past four years in the Cuban capital Havana.

A senator who participated in the talks, said Wednesday that the treaty will be signed in late September. Provided the population agrees, there will finally end the conflict, which half a century ago broke and in total has cost more than 220 000 lives.

Ferme after talks on the final details both camps came out last Tuesday according involved. An official announcement is expected later on Wednesday.


In June, the Colombian government and the FARC A historic agreement in which the rebels renounced violence.