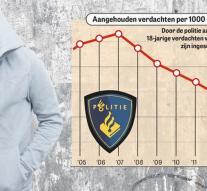 amsterdam - The number of youth bands in the Netherlands has shown a sharp decline since 2008. According to the Cabinet, this is due to the 'personalized approach' of the justice system that was then launched.

Frank Weerman, Professor of Youth Criminology at Erasmus University, sees a whole different statement: the enormously increased use of social media. 'The way young people spend their time and communicate has changed. It's easier to hit each other if you're on the street and you're bored, than via the smartphone, 'said Weerman.

READ FURTHER: 'They have no idea'

Tackling youth gangs has been a priority for years in The Hague. Since 2008, the problem has been monitored. Between 2009 and 2014, the number of criminal youth groups decreased by 27 percent. According to the Cabinet, this would include, inter alia, 'personally-oriented approach', which results in benefits. But it is also acknowledged that 'multiple groups of problems', such as social media, are less visible on the streets through multiple developments.

Since 2014, municipalities have to tackle the problem, especially themselves and 'locally'. The groups would have organized differently lately. Previously, there was one fixed group of known members, now there are more changes. 'More and more young people meet each other on social media and are' loosely attached 'to groups or occasional coalitions,' said Van der Steur, Justice Minister of Justice at the beginning of this year.

A criminal youth group of around 35 youngsters annually produces a total of 1.9 million euros in social costs, proved this year under investigation by the Cabinet.