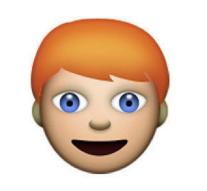 london - Red-haired have to wait a long time, but in 2018 they will finally get red-haired emoji's. After blondes, brunettes and black-haired emoji, next year, most likely, redheads will be reported, reports Independent, based on a list of Emojipedia.

The lack of emoji with rosy hair was a long time in the red-haired community. There was even a petition invoked to bring about change. Twitter is pleased to respond to the announcement. '' Finally red-haired emoji's. That will be time, 'twittered someone.

Other emoji added to the collection are a lama, a flat shoe, a bagel, a teddy bear and a lobster. The proposals, 67 in total, will still be submitted for approval to the Unicode Consortium meeting, the collaboration of large tech companies that go over the icons.