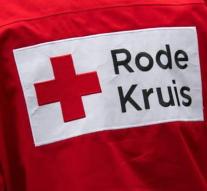 the hague - A few dozen Red Cross employees try to map the damage on St. Maarten on Monday. They do that in the office in The Hague. Photos that have made Defense from a helicopter are being laid on maps drawn just before Hurricane Irma raided the island. This creates an image of damage to roads and buildings.

Last week, hundreds of people in a day made a detailed map of urbanization and roads on St. Maarten. The volunteers brought in 5500 buildings and 194 kilometers away. On Monday, about one thousand photos were taken that made Defense from a helicopter after the hurricane was destroying its destruction. This is how to see what was first and what now disappeared or broken.

'If that picture is there, we know where some help is needed, as there are still parts of the island that have not yet been reached,' said a spokesman for the Red Cross.