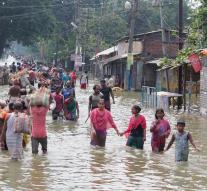 the hague - Since the opening of last week's Wednesday of giro 6868 for victims of the floods in South Asia, 55,000 euros have been collected.

The Red Cross is grateful for the gifts, but says to be very concerned about the huge lack of help in the affected areas.

The death rate due to floods due to severe monsoon rainfall in India, Bangladesh and Nepal has now risen to over 1200. The diseases now emerging from the disaster poses an additional risk of death, suggests the relief organization.

'Still water is a breeding ground for mosquitoes spreading malaria and dengue. Also, people do not have a toilet and do their need in the water. Due to the lack of clean drinking water, they are forced to drink this polluted water full of pathogens. '

According to the Red Cross, almost 41 million people were affected by the monsoon, which is extremely severe this year. The Red Cross puts over 1800 emergency workers for help.