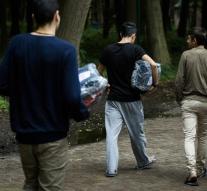 - The Dutch Red Cross comes with a special app for the refugees in the Netherlands. The so-called Refugee Buddy app offers information about the asylum procedure and information on the location and facilities in the immediate area, such as supermarket, pharmacy, church or mosque.

The charity hopes the site will remove confusion among the people. " The app is a logical addition to our existing assistance, '' says director Gijs de Vries of the Red Cross. The app is available from the end of November in the app stores, in Arabic, French and English.

The app was developed in collaboration with the COA, Netherlands Refugees and refugees themselves. They find the app very important because they sometimes feel lost in a new country. " if you're in a jungle, '' said Semereab Zeratsion from Eritrea.

Besides especially practical knowledge, the app also provides information about traffic and transportation, medical facilities and culture in the Netherlands. An editorial board consisting of volunteers, provides the news surrounding the refugee issue.

The aid organization says connecting with Refugee Buddy app on contemporary information needs. " Of the group of refugees who arrived this year in the Netherlands, has an estimated 90 percent a smartphone. For many, that phone during the journey and on arrival in another country their help and support, also to stay in touch with relatives elsewhere, '' said the Red Cross.