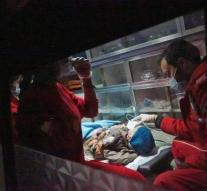 aleppo - The Red Cross has been allowed to drain ambulances with injured and sick from eastern Aleppo. The aid agency reported Thursday morning that now hundreds of volunteers are working 250 people with ambulances from the ruins of the city to remove.

The people who are taken away are both civilians and injured rebels, as the Ministry of Defence announced in Moscow. Russian soldiers ensure that the rebels to leave the besieged eastern town unhindered. That Russians provide the guidance, occurs on direct orders of President Putin. The rebels trip and their family comes to town Idlib, in the northwest.

Entirely without incident, the evacuation is not going. Three people were injured when pro-Assad militia fired on a convoy left the city. One of the wounded was a rescuer.