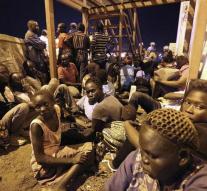 - The Red Cross has temporarily evacuated Tuesday some of its international staff in South Sudan. The charity night, although a cease-fire was declared, the risk of escalation of violence undiminished. The stakeholders, including not Dutch, have sought refuge in Uganda.

Other employees remain for the time being still. They provide, among other capital Juba with water, food and medicine for the 120 citizens who have entrenched themselves in the camp of the Red Cross, but also for thousands of displaced elsewhere.

A repository of the Red Cross 10 kilometers from Juba has been severely damaged by the shelling of the warring parties. What happens to the food that was happened, could not yet be determined by the ongoing threat.