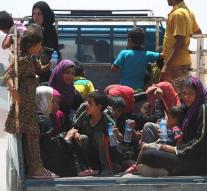 geneva - Possibly one million people will be in the coming weeks and months in Iraq to flee because of the fighting around the city of Mosul. The Red Cross has raised this Friday. The international aid organization is working to raise more money to help in Iraq. Assistance to Iraqis is the third-largest operation of the Red Cross.

The situation in and around Mosul is unpredictable and we must fear the worst, said Robert Mardini, regional manager for the Red Cross in the Middle East.

Mosul early 2014 there were over 2.5 million inhabitants and was the second city of Iraq. Mosul was occupied virtually silent in June that year by the Sunni extremists of the Islamic State have their roots in Iraq. Hundreds of thousands have fled Mosul as a result of the occupation by IS. Warriors IS would gradually be reduced.