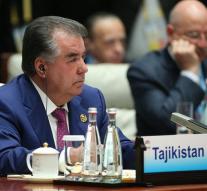 dusjanbe - The head of the Choroeg airport in Tajikistan has been killed by an accident on the red carpet that was rolled out at the airport before President Emomali Rachmon's arrival. When the head of state departed, the helicopter blew the runner away, causing the airport to fall, according to local media Thursday.

The 60-year-old man was slipped from the runner and reached his head on the stones. He died on his way to the hospital.