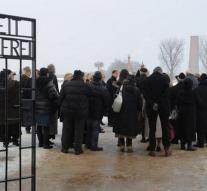 - Stolen door of the former Dachau concentration camp is likely to be found in Norway. Police Bergen found after an anonymous tip of an iron fence gate 190 by 95 centimeters with the infamous Nazi words 'Arbeit macht frei'. The door was lifted on the night of November 2, 2014 at the entrance of the current memorial center Dachau unhinged and included.

The prosecution and police in Germany investigated the case, but the object and the perpetrators were found. For the golden tip, according to the Süddeutsche Zeitung, a reward of 10 000 promised. It must still be officially determined whether it is the original Dachau access. A photo sent by the Norwegians does point there.