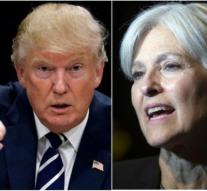 - In three US states that have been decisive for the election victory of Donald Trump, a recount of the votes is becoming more likely. Presidential candidate of the small Green Party Jill Stein has raised enough money in a short time to cover the requests for recounts.

The counter was Thursday, a half day after Stein announcing its action, though at nearly $ 2.5 million. That is more than enough to satisfy the court fees. Which amounts to 1.1 million Wisconsin, 600. 000 dollars for Michigan, and half a million for Pennsylvania.

The first state where an application is made is Wisconsin. The deadline for this is Friday. Meanwhile, the crowdfunding action continues. To be able to pay Stein think you will need a total of 6 to 7 million lawyers.