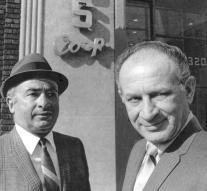 - Phil Chess, the founder of the renowned American record label Chess Records, is deceased at the age of 95. Together with his brother Leonard (1917-1969) he bought the shares of the Aristocrat Records label in 1950, which was then renamed Chess Records. The label played a big role in the history of rock 'n' roll and rhythm and blues.

The brothers were Polish-Jewish immigrants, initially in Chicago bought a nightclub. After the founding of their label, the brothers had already in 1951 a number 1 hit with Rocket '88 Jackie Brenston. Phil Chess produced virtually everything in those years themselves. Gradually the brothers attracted many celebrities to. Among others, Muddy Waters, Bo Diddley, 'Sonny Boy Williamson' (Rice Miller), Robert Lockwood Jr., Etta James, Willie Dixon, Howlin 'Wolf and Chuck Berry stood by them under contract.

Chess Records was sold in 1968 to the Canadian GRT Records. Not long after pulling Fiszel Czyz, like Phil Chess was originally called, back in Arizona. He was taken by his brother into the Blues Hall of Fame.