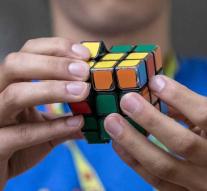 melbourne - A 22-year-old Australian has set a new world record for the Rubik's cube. Feliks Zemdegs needed only 4.22 seconds to solve the turntable puzzle. He did that at a tournament in Melbourne. The old record had been in the hands of a dexterous South Korean, who had solved the cube 'pas' after 4.59 seconds. In January, Zemdegs was able to match that record.

Zemdegs' record has been recognized by the international association that deals with cube competitions, the World Cube Association. The Dutch record is in the hands of Mats Valk. He solved the cube in 4.74 seconds in 2016. That was the world record for a while, but in the meantime Valk has dropped to fourth place in the world ranking.

The Rubik's Cube consists of six colored sides with nine boxes each. The game was designed in 1974 by the Hungarian Ernő Rubik. He used the toy during his mathematics classes. Worldwide 350 million copies have been sold.