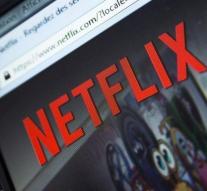 - By streaming services like Netflix, Amazon and Hulu makes the US TV industry a record number of programs. It is too much, warned Fox chief John Landgraf Wednesday.

Programmers create next year about 500 programs. Last year there were 419. Netflix makes 71 programs, and there are children's series, documentaries and programs in other languages ​​do not even counted yet.

According to Landgraf there is too much supply. The market is inflated '', and ultimately the balloon will deflate. ' He had previously said that the market will shrink in 2017, but now says that this is done at the earliest in 2019.


Landgraf is especially critical of Netflix. That makes more than programa HBO, Showtime, Starz and FX together.