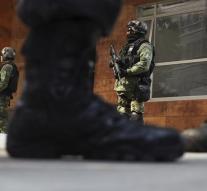 mexico city - Last month a record number of murders were committed in Mexico. Justice registered no less than 2186. There were several killings in some murders. A census showed that in May 2452 people escaped violence.

The Mexican police had to come into action for the first five months of this year for murder. That is 30 percent more than in the same period in 2016.

Many of the deadly violence can be associated with drug trafficking in Mexico. Rival gangs go extremely far to protect and expand their trade. Ten years ago, the government launched a large-scale fight against drug trafficking. But every arrested leader leads irrevocably to the formation of a new gang.

By comparison, in the Netherlands, 120 people were killed by murder or killing in 2015, according to the CBS.