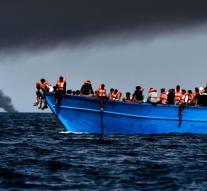 geneva - The dangerous crossing to Europe across the Mediterranean this year proved fatal for a record number of migrants. So far, 4220 people were killed by drowning and exhaustion. This surpasses the death toll already from last year, reported Friday the International Organization for Migration, which keeps track of the sad statistics.

In 2015, not 3495 people survived the journey. The year before 3162 arrived immigrants- both war refugees as people who travel to Europe for economic reasons- to support life. Wednesday were still missing at sea 240 migrants. It is assumed that they are no longer alive.

By far the most deaths (3743) are the so-called central Mediterranean route between Libya and Italy. On the eastern route to Greece fell last year, 415 deaths.