Home / World / Record number of children only to Italy 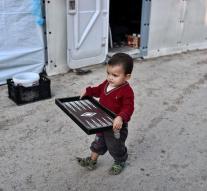 rome - The number of migrant children who fled to Italy without parents or other supervisors, this year is higher than ever before. The UN children's organization UNICEF reported Tuesday that until October, more than 20,000 boys and girls have traveled to Italy unaccompanied by an adult.

In the whole of 2015 were 12 300 unaccompanied children crossing the Mediterranean to Italy. According to UNICEF, most migrant children have no idea of ​​what they can expect in Europe. ' Many children are traumatized by the terrible things they have experienced during the crossing, '' said a spokeswoman for the UN agency. ' Many have seen people drown. ''