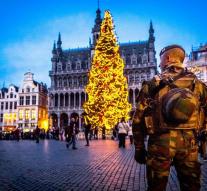 brussels - Belgium has discovered this year a record amount of money that was intended to finance terrorism. The so-called money-laundering section discovered nearly 10 million. That's five times more than in 2011, the newspaper De Tijd Wednesday.

According to the newspaper, the increase partly due to the close cooperation with the banks. That gave the last two years, more than four hundred accounts with the money-laundering because of evidence that it was terror money.