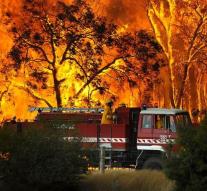 rijswijk - A forest fire in the middle of Portugal killed at least 43 people. Below is an overview of recent forest fires where deaths have fallen.

- January 2017: In Chile, ten deaths fall into a series of over one hundred forest fires.

- April 2015: In Siberia, 23 people lose their lives through forest fires.

- November 2010: In Israel, forty cases are killed by a fireside north of Haifa.