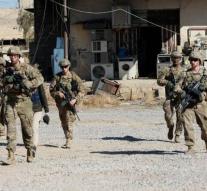 mosul - The reconquest of the Iraqi city of Mosul on the extremists of the Islamic State (IS) does not go as smoothly as hoped. The British general Rupert Jones, the top British officer on the battlefield in the Middle East, stressed that patience is needed for this battle, because the jihadists fiercely defend the city. The general said this Monday, reported The Guardian.

Jones is the second man of the forces of the international coalition against IS fights led by the US. Sunni extremists have claimed Jones between 4,000 and 9,000 fighters in Mosul, including an estimated one thousand foreigners.