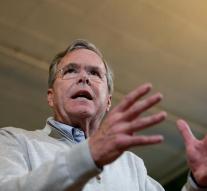 washington - Who hopes for a little peace on earth in the run up to Christmas, do not in any event have to rely on the US presidential candidates Jeb Bush and Donald Trump.


After the last Republican debate of 2015, which Bush first showed its teeth, the two rivals just went on cursing.
'As dumb as a rock,' the real estate tycoon called his opponent Friday on Twitter. Bush, of all candidates the best-stocked campaign chest but has left behind in the polls, hit yesterday Trumpiaans' back. 'Donald Trump is a jerk,' Jeb trusted his audience during a campaign stop in New Hampshire. A remarkable statement for the man who Trump accused during the debate, and yesterday repeated, 'that does not scold the way to get into the White House.'
Still uttering expletives towards the front-runner in the Republican race Bush does seem to have done well. 'This felt like a good therapy,' he said after his diatribe. 'Thank you for letting me lose this moment. '
NEW