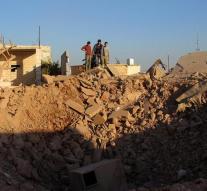 aleppo - Syrian rebels refuse to leave the city of Aleppo through the corridors to open up Russia and the Syrian government. Zakaria Malahifji rebel group Fastaqim said this would mean surrendering to the Russians and the government of President Bashar al-Assad.

Russia announced Monday that Thursday a 'humanitarian pause' for the eastern part of Aleppo observe. During the temporary unilateral ceasefire which even the government forces of President Bashar al-Assad will abide according to Syria, residents of heavily besieged neighborhoods in Aleppo should be allowed to seek refuge.

Also wounded are brought to safety and get moderate rebels a chance to leave the city, so that left only fighters from terrorist groups. According Fastaqim there are no terrorists in Aleppo.