Home / World / Rebels in conversation about peace in southern Syria 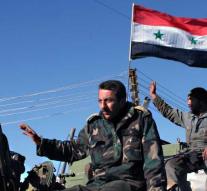 amman - The Syrian opposition and Russian negotiators have started peace negotiations on the southwestern region of Syria, where a fierce battle last week has taken place. According to the rebels, the use of the talks to bring the area around Daraa back under the control of the Syrian government.

A number of delegates from the rebels who are in the area have meanwhile spoken with Russian representatives. They have made their demands known, reports a spokesperson for the Free Syrian Army.

According to him, the Russians want the same deal as previously agreed with insurgents in East Ghouta. Warriors are allowed to leave the area with their relatives, whoever has to accept the Syrian authorities. The spokesman says that the rebels have rejected it. They prefer to see Russian military police in the area than government forces of President Bashar al-Assad.

Jordan, which borders the conflict zone, facilitates the talks between the Russians and the rebels. A meeting is expected to follow on Saturday. The Syrian state television now showed images of villages that would welcome the arrival of the Syrian army. For example, it was clear that the flag of the regime in Damascus was being hoisted on buildings.

On Friday, a Jordanian government official reported that a ceasefire agreement has been reached in southern Syria. But reportedly, air raids have occurred again in the night from Friday to Saturday. The government army has started a major offensive in the south of Syria and has reconquered several villages and towns on the insurgents.