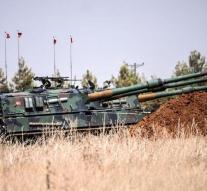 - Turkey-backed rebels have continued to blaze in northern Syria. The insurgents have fighters from Islamic State expelled from the area between Jarablus and Azaz, said sources within the security forces against the Turkish news agency Anadolu.

The Turkish government last month sent troops and tanks across the Syrian border to do battle with her opponents. According to Ankara the offensive aimed at people who were chased by IS, for example, from border town Jarablus, to return home.

Turkey and its allies among the rebel groups in northern Syria were not only clashed with IS, but also with the Kurdish YPG: an ally of the United States. Ankara considers the YPG as an extension of the Turkish-Kurdish separatist PKK.