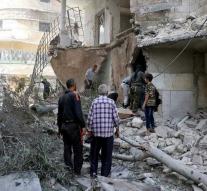 - Warplanes have in the night from Wednesday to Thursday districts in the Syrian city of Aleppo bombed those rebel hands. Representatives of the rebels spoke in front of the Syrian Observatory for Human Rights of the heaviest bombardments of recent months.

The Syrian army has not communicated anything about the attacks. Syrian state media have not reported taken.

US Secretary of State John Kerry called on Russia immediately to stop the Syrian government on Wednesday flights over combat zones in Syria. He called it a last chance to save the shaky cease-fire.