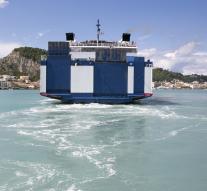 athens - Ferry crew in Greece will finish work on Tuesday and Wednesday. Feathers in the Aegean Sea will therefore continue for 48 hours. The sailors are still unhappy about the measures that must counteract black work in their industry. In addition, they oppose the planned cuts to their retirement, according to PNO Trade Union Monday.

The staff were already in strike at the end of last year and kept the feathers eight days off. That led to sometimes chaotic conditions on the Greek islands. For example, a number of islands were devoid of fuels and medicines. It does not seem so far in the coming days, but non-airport islands will be closed off from outside the world.

Greece is getting more strikes this week, including regional and government transport. The Greeks thus express their dissatisfaction with the new package of cuts that the Greek parliament announces on Thursday. The cuts are needed to pay off the billion debt at the European Central Bank and the International Monetary Fund.