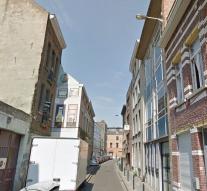 molenbeek - The Belgian police on Wednesday arrested one person in Molenbeek, around the corner from the house of the brothers Abdeslam. Justice, however, stressed that the arrest did not directly have anything to do with the attacks in Paris.

The house of the prisoner is located on Pearl Street. The police had cordoned off the action for the wider area of ​​the house. Some neighbors also had to leave their homes.