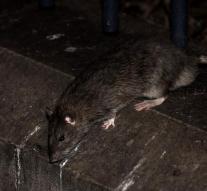 washington - The American capital Washington has been plagued by a rat pest since last winter. This is what the head of the Mayor's office reports, Muriel Bowser, based on figures from a distribution company.

The number of imprisoned rats increased by 65 percent over a year. As soon as the sun sets in the city, the problem of pests begins to become visible and rats are seen everywhere in the city. The hungry beasts have mainly provided garbage trays with food residues.

According to figures from Orkin, a company that is fighting rats, Washington has steadily increased to third place of American cities with a rat problem. Chicago (first) and New York enter the list.

Although the effective fighting of rats according to the municipality is difficult, one is still optimistic. According to Gerard Brown of the Department of Public Health, the problem has been caused by an unusually soft winter. 'A week of great frost this winter and the rat population will be virtually decimated,' he says.