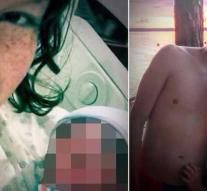 arkansas - Parents of a 15-month-old baby heard the child's cries for help too late. They found the baby battered, covered in blood. The girl's parents had fallen into a deep sleep under the influence of marijuana, meth and K2.

The daughter of the American Erica Shryrock (19) and her friend Charles Elliot (18) was barely fifteen days old when Erica and her friend Charles ended up with friends who offered them drugs. The couple knocked out a large dose of drugs, but when they woke up they heard their newborn baby screaming. That is what Nieuwsblad reports.

The girl was attacked by the many rats in the house of the friend of the couple. Her arms, fingers, hands, and face were so battered by the creature that reconstructive surgery had to be used to repair them.

At first the couple did not want to go to the hospital with the girl, for fear of losing her. It was the mother of Elliot who demanded that the child was checked by doctors. When the police searched the house in question, they found bloody prints of rat paws and a baby hat that was soaked with blood. The house has been declared uninhabitable.

The girl's parents were sentenced to five years in prison on Saturday. Since the couple has been in pre-trial detention for 293 days, they may already be released in a month. Their baby has now been adopted by a new family.