Home / World / Rather no weapons in Levi's stores 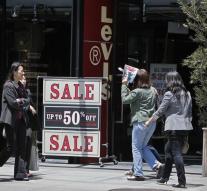 - The clothing giant Levi's has sued in the United States are not armed to come shopping. The boss, Chip Bergh, has in an open letter on the internet asking customers to bring any weapons, even though they've got a license, The Washington Post reported Thursday. 'Nobody has firearms needed to fit a pair of jeans,' Bergh stressed.

The Levi's jeans comes from the Wild West of the nineteenth century, but Bergh is not nostalgic about cowboys. He pointed out massacres that are caused by firearms. Bergh wants his own account, not interfere with the American debate on gun control, but hopes respectful gun owners to satisfy the desire of the store and no weapons bring to the Levi's shop.

Levi's, according to Bergh European headquarters in Brussels, shops include Paris, Nice and Orlando, all places that were recently hit by attackers which caused carnage. In June, shot a man in Orlando For example, 49 people died.