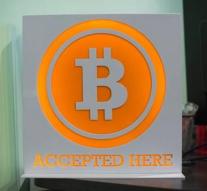 new york - The virtual currency bitcoin is worth more rapid. The price recently passed the limit of 1400 dollars, on Thursday the value went over $ 1600.

Experts write the upsurge of recent days to the fact that more and more national governments recognize the bitcoin as legal tender. This happened recently in Japan, for example. Meanwhile, India and Russia also seem to consider such a step.

Thursday at the beginning of the evening, the bitcoin hurt almost $ 1622, and then back down again. Around $ 15.00 (Dutch time) the currency was worth $ 1602. The bitcoin has become a popular investment object in recent months, because there is a lot of political and economic uncertainty in the world. Early this year, the currency was still traded for around $ 1000.

The electronic means of payment has been in existence since 2009 and is not undisputed. The bitcoin is also widely used by criminals, mainly because of the possibility of completely anonymous payments.