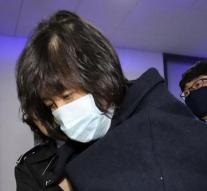 seoul - A confidant of the President of South Korea who is suspected of having abused her relationship with the president it remains stuck Tuesday for further questioning. Choi Soon-sil would have used its influence to gain access to confidential information and for personal gain.

The 60-year-old Choi was arrested Monday night. Choi, the daughter of a cult leader, knows President Park Geun-hye for forty years. In the seventies she became an important mainstay for Park, who was mourning the murder of her father, dictator Park Chung-hee. Who was killed at a dinner by the chief of his intelligence.

Park last week offered its apologies but said Choi's influence was limited to reading drafts of speeches, The Guardian wrote. According to South Korean media Choi had a sizable finger in the pie in government policies, including where the DPRK concerned. The South Korean TV station JTBC says documents Choi's computer in their hands, indicating that they had access to confidential information, including on Japan and North Korea. They would have used her relationship with the president to wheedle money from companies such as Samsung and Hyundai that locks toward non-profits which it has set.