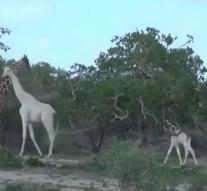 - Images of two rare white giraffes walking through a protected nature reserve in Kenya are going to the world. Nature Conservationists of the Hirola Conservation Program made the video of an adult female and a calf.

They would be more and more seen in the region, these white giraffes. It is not about a special kind of giraffe. These long necks usually just have the typical dark spots on their fur. These animals, however, have leucicemia, a condition that leads to reduced pigmentation.

The nature conservationists write in their blog that the mother and the calf stayed very calm while they were filmed. 'They did not seem to be disturbed by our presence. The mother walked a few meters before us and the calf was behind the bushes. '

It is the first time the white giraffes were filmed in this region. However, there were already white-necked images in Tanzania and another part of Kenya.