Home / World / Raqqa is about to fall 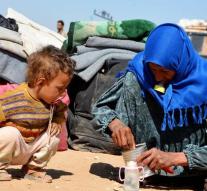 beirut - Raqqa, declared by the Islamic State in 2014 as the capital of the caliphate, is about to fall. A spokesman for the Syrian-Kurdish militia YPG said on Saturday. It is rather a matter of hours than days. 'The battle continues, but IS is almost defeated. The city can already be freed today or tomorrow, 'said Nouri Mahmoud.

The Syrian Observatory for Human Rights reported that Raqqa buses were called in to bring out the last IS warriors and their families.