Home / World / Rapper wants to prove that Earth is flat 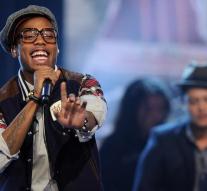 winston - The American rapper B.o.B is deeply convinced that the earth is flat and wants to prove this through a crowdfund action. With the money he wants to buy 'satellites and shoot more in space'.

The GoFundMe campaign, called Show BoB The Curve, starts next Friday and B. o. B hopes to get around $ 200,000. The site Uproxx assumed that he would afford 'a small economy class satellite'.

The action has so far been as flat as, according to the rapper than, the earth: only 671 dollars have been paid. Since 2015 he is already busy to prove that the earth is really flat.

'No matter where you stand, the horizon is always at eye level. I did not want to believe it either, 'said the rapper, especially known for his hit Nothing 'on you, according to Metro. 'Do not believe what I'm saying, but research what I'm saying. I take it against the greatest liars of the world. You are all deceived. '