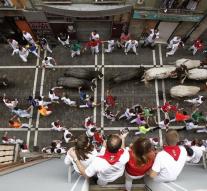 pamplona - Five people in the northern Spanish Pamplona arrested on suspicion of raping a young woman during the massive celebrations of San Fermín, known for its bull run.

A judge had released the five, including a member of the Guardia Civil, tighten after the declaration of sexual assault and rape by women on Thursday, as is Saturday according to Spanish media.

The San Fermin festival lasts from 6 to July 14. Saturday, wounding two men bulls in Pamplona. Elsewhere in Spain came Saturday a 28-year-old Spaniard killed in a similar celebration. A bull pierced his lung and heart in the village of Pedreguer, between Valencia and Alicante.