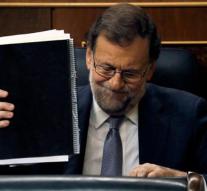 - Outgoing Prime Minister Mariano Rajoy is also Friday failed to win the confidence of the Spanish parliament for a second term. Unless the next two months, yet found a solution to the political deadlock, making it the countdown began for new elections. This is the third trip to the polls in a year.

As well as Wednesday, when the first vote was, Rajoy was supported by only 170 deputies in the Cortes, which has 350 members. Besides the conservatives of his own PP, spoke only liberal newcomer Ciudadanos and a small party of the Canary Islands in favor of the prime minister. Too few to govern. The Social Democrats, the anti-austerity Podemos alliance and regional parties in the Basque Country and Catalonia were against a new government-Rajoy.