Home / World / Rajoy does not talk about independence 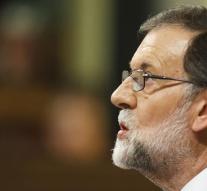 madrid - Premier Rajoy said in the Spanish Parliament last Wednesday that he wanted to talk to his Catalan colleague Puigdemont, but not about independence from Catalonia. For example, in a dialogue, it may be discussed financing, autonomy or public service within the framework of current rules and institutions.

Rajoy rejects Puigdemont's idea of ​​losing Spain from international mediators and through negotiations. Rajoy said there should not be talk about Catalan independence at all, 'because there are insufficient reasons for it and because the support is not so terribly big. '

The radical nationalist Puigdemont appeared to strike on a dramatic statement of independence in Catalonia on Tuesday. However, in Barcelona he spoke of a suspended independence. And he wanted a dialogue with Madrid about achieving true independence.