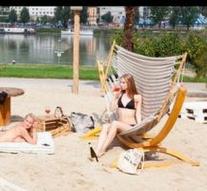 linz - A splendid background picture on the Facebook page of the Austrian police has heated the moods in the Alps. On the scandalous scene, two Austrian agents walk along a beach with two scarce-clad Austrian shoots.

One servant seems to lick the ladies, but is corrected by his colleague with a raised finger. After criticizing that the photo would be sexistic, the image was removed again.

Politicians Sabine Promberger of the SPÖ also finds that the suggestive picture in her eyes can not get through the bracket. 'Sexual expressions in the police are out of the question. I therefore decline this image. It's pure sexism, 'she responds to news site Oe24. That.