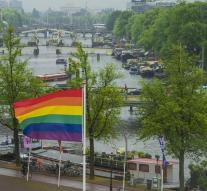 - There will be a short-term emoji of a rainbow flag. That's the Unicode Consortium, the body that decides on emoji decided. The emoji a white flag and use it together with the rainbow, the rainbow flag is displayed.

The Unicode Consortium has already received a request in June 2015 to add a rainbow flag emoji. The Amsterdam Maurice Beljaars did last month a request.

By combining two existing emoji new emoji can be quickly implemented by software makers. Otherwise have had to wait until June 2017 comes as version 10 of the Unicode Directive.