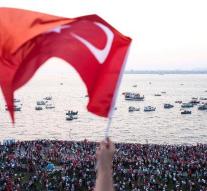 - The Turkish police made raids Tuesday on 44 companies in Istanbul. His 120 top executives of these companies held as part of an investigation into the failed coup attempt last month. This was reported by state news agency Anadolu.

According to Anadolu are giving companies accused of financial support to the movement of the Muslim cleric Fethullah Gulen residing in the US. Turkey says that he is the mastermind behind the coup of July 15, but Gülen denies the accusation.

The police began raids in the districts Uskudar and Umraniye Istanbul at buildings belonging to an unnamed holding company, the agency said.


Since the failed coup are 35. 000 people arrested, at 17. 000 is a formal accusation. Tens of thousands of people have been inactive.