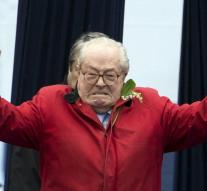 - The French police and financial investigators on Wednesday raided offices and the residence of the French far-right politician Jean-Marie Le Pen (87). They were looking for evidence that the founder of the National Front party has evaded taxes via accounts abroad.

Le Pen was at the time of the invasion abroad. He denied to Reuters that he has done something wrong. A French website had reported that Le Pen has a secret account in Switzerland that he manages through a business associate. " I am stunned and furious. I do not see what this raid justifies ", said the controversial politician, who earlier this year was put out of his own party.