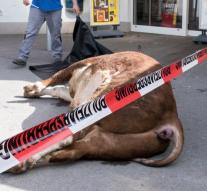 eggenfelden - A bull broke chose Monday in the Bavarian town of Eggenfelden a supermarket as a safe haven. The animal had escaped when the trailer in which he sat was wrapped in an accident. Ten cattle took the legs, which were caught after all quickly the bull again.

The bull was completely panicked, ran out in the street upside down a fireman and then managed to enter the store. Staff and customers took refuge soon. The raging bull set up in the store for 10 000 damage before a police officer killed him with a pistol shot.