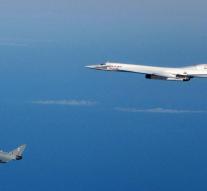 london - The Royal Air Force has intercepted two Russian bombers that flew close UK airspace over the Atlantic. According to the British Ministry of Defence two aircraft of the Typhoon were the air sent to the Russian aircraft "to guide ".

It involved two Russian bombers Tu- 160. The British jets behind those devices until they disappeared.