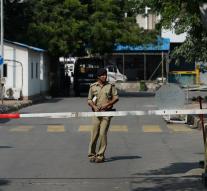 - The Indian authorities Sunday rocked by the release of radioactive material at the New Delhi International Airport. According to the spokesman of the rescue specialists called the fire there was a leak originated in a shipment cancer medication. The package was in charge of a unit of Air France and was destined for a local hospital.

The surrounding area was deposed, but control the amount of radiation was so small that there was no danger to humans and the environment. According to news agency IANS was about the radioisotope is molybdenum-99, intended for the treatment of tumors.