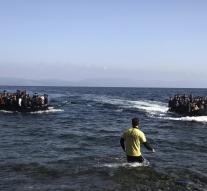 - Radical Muslims are trying to seize the refugee crisis in Germany to recruit more supporters. For this, the chief of the German domestic intelligence warned Hans- Georg Maassen, Sunday in German media. Islamists would actively approaching refugees. "We've known for over a hundred cases," said Maassen.

Maassen did not rule out that terrorists travel with the refugees, but said the find is not very likely. According to the security chief would be " unusual " that people with a combat mission the perilous crossing from Turkey to Greece car.