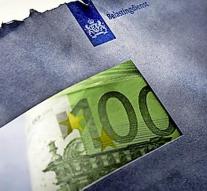 amsterdam - The Netherlands is increasingly deserving of data centers, online stores, IT services and startups with digital products. With the rapid growth of this digital economy, research on taxation on new forms of data use is indispensable, says a finance minister at the Ministry of Finance.

Krista Bruns, Policy Officer General Tax Policy at the Ministry, notes that the Netherlands counts many digital platforms where companies and individuals earn money on data. The supply grows so stormy that it is necessary to think about it, she states in ESB ESB that appears today.

The publication comes at a crucial moment. Estonia has been chairman of the EU since 1 July and has made digitalization the most important economic goal for itself. Brussels attaches great importance to free movement of data.

At the same time, the data and who deserves it is becoming increasingly important for the economy. Privacy organizations and consumer clubs want security about the value of personal data. For startups, those data are often the basis of all their earnings.

Bruns, involved in the estimation of budgetary effects and earnings models in digitization, advocates a thorough debate on proposals for possible taxation of data transmission.

She also states that the tax return will eventually decline in the long run if the system is not adapted to trends such as robotization, digitization and the sub-economy.

For some people, the increasing number of webshops and sub-platforms now provide an important part of their income. Belgium introduced a 10% tax on income from the sub-economy, from which it expects € 200 million extra revenue.

Bruns also sees a role in blockchain. The Dutch Tax Administration could embrace this network technology, which is being charged among other bit-coin transactions, to ensure new revenue flows.