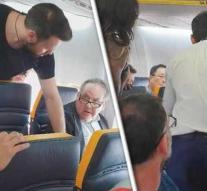 - The retired man who insulted a dark woman during a Ryanair flight is not being prosecuted in his homeland.

David Mesher, a 77-year-old man from the United Kingdom, named Mrs. Gayle an 'ugly black bastard' during a flight from Barcelona to London Stansted Airport last October. According to The Mirror, the traveler now avoids legal proceedings. A fellow passenger filmed the tirade. The images caused the fuss online.